Summer is not usually a big season for blooming Petrocosmeas, with most species being autumn and winter bloomers.  An advantage to having a larger and more diverse collection of Petrocosmea hybrids and species is that there are some which do flower in the summer.  For me, P. barbata, P. nervosa and P. parryorum have become reliable summer bloomers.  Hybrids incorporating these species also show a tendency to flower during the longer and warmer days of summer.

A few years ago, I was excited to add two new cultivars selected from a remake of the same cross that produced the old hybrid P. 'Momo'.  This time, Mr. Nakayama, who incidentally produced 'Momo', chose two cultivars that exhibited new and desirable qualities.  P. 'Asa Blue' was selected for it's tendency to produce tremendous quantities of large blue flowers.  Now, after growing this hybrid for several years, I can say that it clearly takes a few years for it to reach it's prime.  My original plant, pictured below, has finally shown it's potential for me.  The plant shown is currently putting on a spectacular show on the north facing window sill of my bedroom.  What a joy it has been to awaken to this joyous sight each morning for the past two weeks.  It shows no sign of fading and there are still lots of buds coming along.  Today, I counted 56  open flowers.  The plant has been growing in a five inch pan pot for the past four years, and has not been repotted.  I have grown it under lights, until two weeks ago, when I brought it to the windowsill so that I could enjoy the show more readily.  ﻿I advocate keeping Pets in the same pot for several years, and not over feeding.  I also believe that allowing the plants to get dry between waterings encourages more flowers.  Overfeeding and keeping plants constantly moist, at least for me, produces large leafy plants, but few flowers. 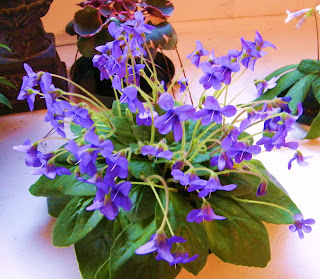 P. 'Asa Blue' (above) in flower this morning on my north facing bedroom windowsill.

P.' Asa Blue' also has been successful as a parent in one cross for me.  The photo below shows one of it's progeny...P. 'Keystone's Brilliant' (P. 'Asa Blue' x begoniifolia).  This cultivar was selected for the bicolored flowers with lots of white in the throat.  A nice yellow center also adds to the brilliance of these flowers.  My one plant of this hybrid is just now coming into flower.  It has always flowered in summer for me, making it another hybrid with potential as an "off season" bloomer among this genus which mostly flowers in the winter. 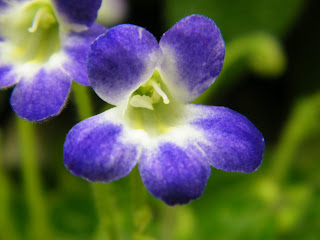 As more and more hybrids are produced, hopefully, we will one day have Petrocosmeas in flower all year long.  For now, these few summer-blooming Pets are treasures in the long, hot days of summer.
Posted by Tim at 9:32 PM

Hello friends!     It's been a while since I've posted to the blog.  I have not been stagnant, however.  Thanks to all of those who have written.  I've gotten lots of emails on Petrocosmea-related topics, and many have asked about various aspects of Petrocosmea culture.  I've decided to use those questions as a guide for future posts, since those of you who have written have often mentioned that you know of others who are having similar questions.  The support for this blog is overwhelming.  I never envisioned it being as popular as it has become.  The level of interest in Pets has grown over the last few years and continues to grow from what you are telling me.  So, I decided to kick of the new posts with this one which is basically just an update on what my Pets and I have been up to.

First, something fun!   Below is a photo of my newest seedling to flower.  I am very excited that it is flowering now, in summer, a time when most Pets are in active growth here in southwestern Pennsylvania, where for a couple of weeks now we've been having a record-setting heatwave and drought.   Why does that excite me?  Well as a hybridizer, one of my goals is to extend the blooming season for the normally strongly seasonal winter flowering genus.  Most Pets for me flower between October and March.  Having a seedling flower now gives me hope that it might provide a plant that will flower both in summer and winter, thereby extending the season of the Pets for the home grower and for summer shows.  The second exciting thing about my new baby is that the flower is white!  Bright, sparkling, purest white with a sunny yellow center!   The cross is P. forrestii x begoniifolia.  P. begoniifolia often flowers in summer, so I'm sure that is where the bloom time for this seedling comes from.  It also is a white seedling of a cross where one parent is lavendar (P. forresttii), so that means that P. begoniifolia may be dominate for color over P. forrestii.  This is only my second hybrid seedling that has ever had white flowers.... the other P. 'Keystone's Bantam' was a white seedling from among nearly forty siblings all of which were purple or lavendar.  It will be fun to see how this current seedlings' siblings flower. 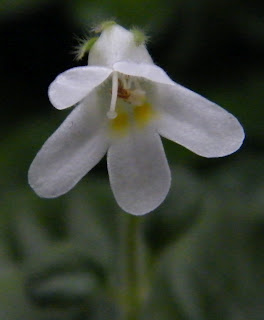 The first seedling to flower from P. forrestii x begoniifolia is pure white!!  No sign of the lavendar flowers which it's maternal parent has.  Will the other seedlings in the cross also be white?  Time will tell............

I'm growing out 13 seedlings from this cross....all that were produced.  Few seeds were produced, and only these 13 germinated.  The seedlings germinated last January and are now six months old.  Only one has flowered.  None of the other are showing buds.  Foliage is more like P. forrestii, but with the rounder shape and deep bubbly veining of P. begoniifolia.  I had hoped for some of the burgundy purple undersides to the leaves from P. begoniifolia, but so far, none are showing that characteristic.  I would love to self and sib cross some of these to see what happens to flower color and foliage in the F2, but often Pet hybrids have been reluctant to produce pollen for me.  Of all my crosses, this is the one I would most like to sib cross to get an F2 generation. 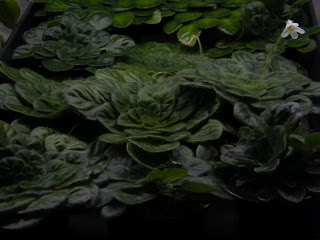 The tray of P. forrestii x begoniifolia seedlings. The dark green foliage makes the white flowers of the first seedling to flower really stand out!   I will soon have to seperate them and give them more room.  They are going to be more like the P. begoniifolia as far as plant size goes, it appears.  Some are producing lots of offsets (which I detest in hybrid seedlings).  I often select against offset production in seedlings...so once they flower, unless the flowers are truly spectacular, those will likely go into the garbage bin.


So, that's the most exciting thing in the Pet Cave right now.  I look forward to getting back to the blog and "talking Petrocosmeas" with you again.  ~ Tim
Posted by Tim at 5:21 PM