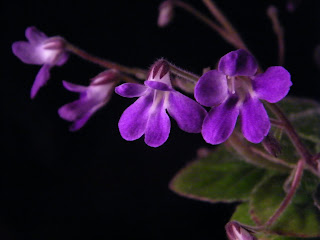 Every day brings a surprise for the grower and hybridizer of plants. Since the cultivation and hybridization of Petrocosmea is still in it's infancy, I'm finding this genus, my favorite gesneriad genus, especially thrilling. If you have never tried hybridizing, you really must. I promise you that if I can figure it out, anyone can. I have no training in this stuff....I just started with an interest, then a fascination, then, some might argue, an obsession. I read everything I could find on the genus, (and I could find very little to read, let me assure you.) But, mostly, I observed my plants, and tried, and failed, and tried again, and failed again (repeat this ten more times....). Then finally one day, it worked! So, pick a favorite gesneriad or two (I guess to hybridize one would need at least two...)...and try it! You'll be in for an incredible journey!

So, what was today's surprise? Well, my hybrid from last year, is flowering again, only five months after it's first flowering...and it is flowering in the summer! Why am I excited about this? Well, for one thing, it shows great promise of having a Petrocosmea that will flower more than once annually....it extends the number of days in a year when the plant will be in flower! And, it extends the flowering season into the summer months...a time when, for most of us, our Petrocosmea plants are not in flower. The hybrid, pictured above, is P. 'Keystone's Whipporwill'. The parentage is P.' Asa Blue' x begoniifolia. 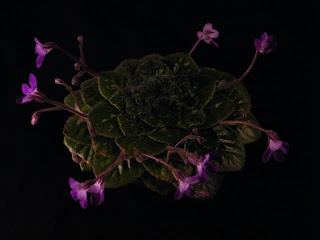 P. 'Keystone's Whipporwill' in its second bloom.... gets better with age. The original plant, pictured above, is growing in a three inch diameter, one inch deep condiment cup...the type used in restaurants to serve sauces, etc. The center leaves are tight and puckered due to my choice to switch my fluorescent lights to T8 bulbs about three months ago...resulting in a great deal more light...many of the Pets don't care for it. I will be reducing the hours/day that the lights are on to make the plants happier. But, other than that, the plant has performed well. It grows easily, has not suckered, so far, and has attractive deep green foliage with a bronzy/purple cast and underside. Foliage is reminiscent of the P. begoniifolia parent, but more heart shaped, and a bit softer, like the P. 'Asa Blue' parent. P. 'Asa Blue' is a remake of the cross which produced 'Momo'...P. nervosa x flaccida. It flowers several times a year, and has a high flower count. This cross marked the first success at using a Petrocosmea hybrid as a parent. So these hybrids have three species in the background.
With maturity, the pedicels are producing three to five flowers each, on the average. Prior to taking the photo, I removed six spent blossoms. There are still lots of buds coming underneath the leaves. This promises to increase the bloom count and extend the flowering season. 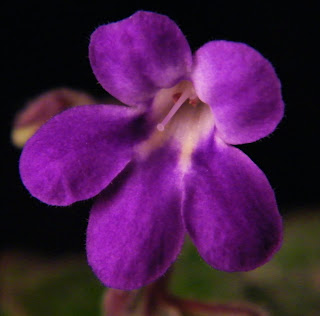 The lighting in the photo doesn't clearly show the attractive bright yellow stripes in the throat of the flowers...but they are there. The blue in the photo is pretty accurate. Flowers have the shape of the begoniifolia parent, and this is also where the yellow comes from. Flowers are larger than either parent too. Plant size seems compact so far. 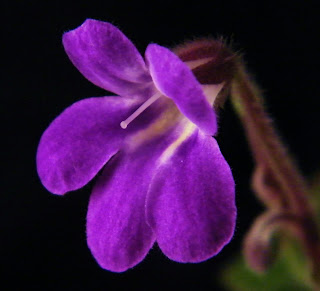 Another characteristic that I selected P. 'Keystone's Whipporwill' for was the attractive purple flower stems and calyces. I felt that since most Petrocosmea stems and calyces are green, this added another pleasing characteristic to the hybrid. I have distributed a few leaves to close friends for testing. Now, with further evaluation, I will begin to distribute the plant more widely...guess I'd better put some leaves down for myself too...for insurance. More than two years in the works, I'm happy with the result and consider the effort well worth it!

Bigfoot....Story of a Big and Furry seedling! 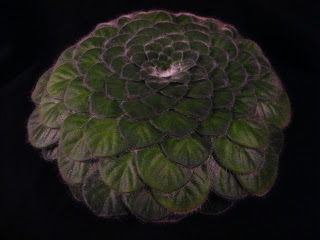 I have trouble even calling this baby a seedling...it's so big! The picture above shows a great example of the agonies of hybridizing....waiting to see a new seedlings full potential before deciding to keep it or cull it. Sure it's a nice plant...even a nice Petrocosmea...but I'm trying to hybridize for more than a "nice" Petrocosmea...we already have plenty of those designed by Mother Nature in the form of the various species.... At around nine inches in diameter...yes nine inches in diameter, its an impressive green plant. The result of a cross between the compact and happy little species P. forrestii, which was it's mother, and the much larger and bolder P. duclouxii (or grandiflora, depending on whose opinion you favor). It gets it's form from its mom. To look at the photo and not know the plant size, one could easily assume it was a photo of a non-flowering P. forrestii...but this guy is BIG!!! Larger, even, than it's father..P. duclouxii. 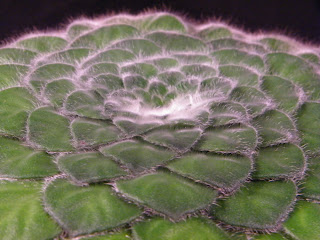 Note the furry leaves...the long silvery hairs on this plant clearly came from P. duclouxii. They are soft and silky and enhance the plant's appearance and appeal. This seedling has two named siblings...P. 'Keystone's Little Rascal' and P. 'Keystone's Angora'. ..(both of which are pictured in previous posts on the blog). It did bloom, last year. Flowers were very similar in color and size to it's P. duclouxii parent. The flower count for a first bloom seedling was very good. My records show that it produced 22 flowers over the first bloom season. The bloom season was from late January through the end of March...so it had an acceptable flowering period.
So why am I hesitant to name it? My hesitation is from two concerns....1) was it different enough from P. 'Keystone's Angora' and 2) the flower pedicels were long...much like P. forrestii. The pedicels appeared wiry and didn't hold the flowers upright at the best attitude. They did support the flowers..they didn't flop, it was just that when I looked at them...they didn't look back at me as nicely as I would have hoped. The flowers were quite large...larger than either of it's two siblings, which was a plus. The lobes, however, were sort of pointed more like the forrestii parent and I felt the rounder lobes of 'Keystone's Angora' were more attractive. The flowers on this one were more "star-like" and pointier in appearance.
So, another year of growth has shown that this seedling is different in several promising ways, and it is surely larger than it's two siblings. It shapes up nicely, and makes an attractive rosette. Lets just see what the next flowering season produces. And, of course, we'll see if it produces suckers...so far, none of the selections in this cross have done so. (I select against offset or sucker production in my hybrids, as I feel it detracts from the nice, smooth, flat rosette. The plants root easily from leaf cuttings, so I feel the suckers are not needed.)

The miserably hot weather we've been having is not "a favorite" with my Petrocosmeas. While they much prefer the cooler temperatures of autumn and winter, the humidity that comes along with the warm temperatures does provide some comfort. As the days get hotter, I lower the number of hours that my lights are on and increase the air movement in the basement growing area. The mature plants seem to just stand still, in suspended animation, while the little seedlings actually chug along, growing at quite a rapid pace.

A few species are in bloom....P. barbata, P. begoniifolia, and even P. nervosa and P. sp. 'vittatae' are blooming. The hybrids, P. 'Asa Blue' and 'Short'nin' Bread' are also in flower now. To test my theory that successful seed set only occurs in cold temperatures, I tried to self all of the above and got nothing. I tried crossing several of them also...and got one enlarging seedpod on nervosa, for a month, then it died. They just seemed to laugh at me and my folly of asking them to do something that I was pretty sure they were not about to do....and they didn't! I have tested pollination in warmer temperatures for two summers now without success. Last year I did get three mature seedpods on P. begoniifolia, but when I opened the dried seedpods, there was not a single seed to be found. I even examined them under a microscope...no seeds. In winter, with cold temperatures, I have much greater success with seed formation.

I mentioned the hybrid seedlings. This summer I am watching a number of exciting new crosses coming along. My favorite, so far, this year, is a cross between P. forrestii and P. minor smooth leaf form. This is only the third hybrid that I have been able to produce from P. minor. The plants are making lovely deep green rosettes, similar in size and appearance to P. forrestii, but with a deep green glossiness to the leaves that is definitely P. minor!!! One seedling in particular has leaves that are very glossy. 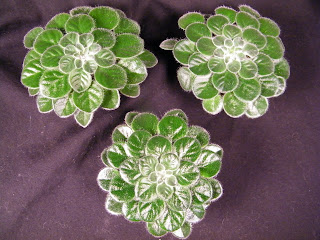 A trio of seedlings from a cross between P. forrestii and the smooth leaf form of P. minor. The seedling in the lower portion of the photo is much glossier than it's siblings and a bit deeper green in color. From among a tray of a dozen seedlings, this one has stood out from the very early stages for the glossiness of the leaves. Note the slightly different leaf shapes and the differences in the leaf veining. The seedling in the upper right has leaves that are nearly perfectly round, like minor..... while the other two seedlings have a bit more of a point at the tip of the leaf...more like forrestii. 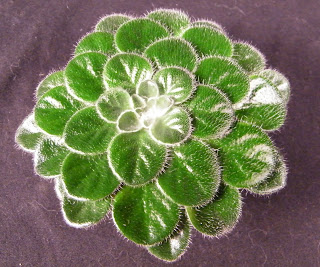 "The One To Watch" at least from the standpoint of foliage. This seedling of P. forrestii x P. minor smooth leaf form has leaves that are significantly glossier and shinier than it's siblings. I'm talking to this little guy every day now! The seedling in the photo is now four inches in diameter.