Lost and Found - A Tiny Surprise

One of the first lessons I learned as a budding gesneriad grower was that the first thing one should do when acquiring a prize new gesneriad is SHARE IT! At the very least, propagate it and then share it. Why? Often, events in our lives can get in the way of the care of our gesneriads, or they simply may not like the care we have to offer them, and they die. But, fear not, if we've followed the first rule of growing gesneriads, and we've shared our prize plant, we often can get it back from the friend with whom we've shared it. That has happened to me more times than I care to remember, and recently I was reminded of how true that rule can be.
The story begins a couple of years ago when I wanted to test whether the "miniature" gene that has shown up in my hybrid 'Keystone's Bantam' would be passed along to its offspring. So, I crossed P. forresttii with pollen from 'Keystone's Bantam'. I used forresttii because it was the smallest of all the species I had grown at that time. A seedpod did indeed result, and sure enough, as those zillions of tiny seedlings began to mature, it was evident that something unusual was going on. They were all not only mini's but microminiatures.... the leaves remained the size of a sesame seed on all of them! I thought that was "too miniature" and that they were stunted. So, I repotted them... and began to fertilize them. They were all healthy, but just very tiny. After about a year and a half, I decided they were rejects and tossed them all out. But, I gave a couple of them to a friend who is known for growing spectacular, prize winning Petrocosmeas. I had forgotten all about them until recently when I was visiting that friend. We were making a Sunday morning sweep of the plant room when I happened to notice among the Pets, a tiny little plant. I picked it up and saw the label.... There it was, my tiny little Petrocosmea hybrid...still tiny! See the picture below, with the little plant beside a quarter for comparison. ........... 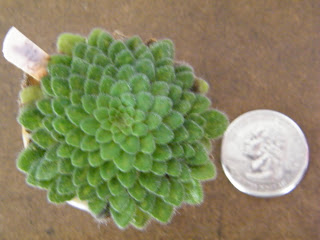 The plant was growing in a one inch pot, but appeared healthy and thriving....and under two inches in diameter. It is now almost three years old and it remains very small, with lots of tiny leaves in a neat little rosette. So far, it has never bloomed. 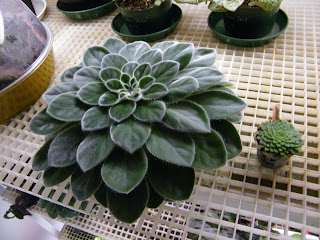 My tiny little hybrid Petrocosmea, sitting beside a standard P. sericea. Each of those little squares on the grid is 1 cm x 1 cm. This little guy proves the value of sharing plants AND the value of not being too hasty to make judgements about new hybrids that show new and unusual traits.
The genetics that are showing up within the genus Petrocosmea, as I am getting to grow out more and more crosses are amazing me! Who'd have ever guessed that mini Pets would have shown up so early in this adventure? The variation in flower coloration and extra petal lobes, ruffles, etc is also a wonder to see. I counted around fifty seedlings this morning in the Pet Cave that are yet to flower for the first time...and these from five different new crosses. My excitement with these seedlings in continually renewed.
A happy ending.........I'm delighted to say that my friend shared a dozen or so little leaves from the plant, and they are already forming tiny little babies in my prop box. Now, if I can just grow them on ....and see if they remain minis. I also still have a good supply of the seeds from that original cross in the freezer, so I'll be planting them again this winter. Lesson learned....again?!
Posted by Tim at 6:50 PM 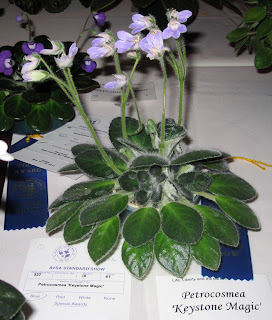 For me, the ultimate thrill of hybridizing has been seeing my own creations exhibited by other growers in a show. At the recent AVSA Convention show in Cherry Hill, NJ, my friend, mentor and exceptional gesneriad grower, Paul Kroll, entered my hybrid 'Keystone's Magic' and won a blue ribbon in the flowering Petrocosmea class. Paul does such a great job with Pets, and this plant was beautiful. Soon after I arrived, Paul came over to tell me that he'd entered a couple of my Pet hybrids in the show. We were both happy with the result. 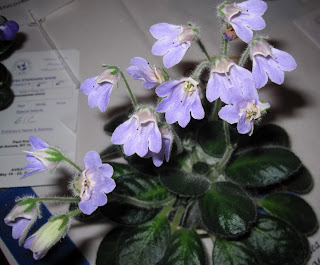 P. 'Keystone's Magic' is from a cross between rosettifolia #3 and sericea. The cool thing about this plant is that it is showing multiple flowers on each cyme. Both parents, for me, have always had a single flower, rarely two, per cyme. That's a fun aspect of hybridizing with Pets.... I never know what's going to develop. A couple of the cymes on Paul's plant have six flowers per cyme...which shows great potential at increasing the flower count on hybrids. The flowers were larger than in either parent and with several per cyme, I thought the cymes did a nice job of holding the flowers upright. 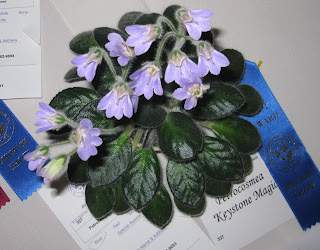 The flower color on 'Keystone's Magic' is a lovely silvery lavendar, with three yellow stripes in the throat of the corolla. The flowers contrasted nicely with the dark foliage.. My only disappointment was, and always is, the suckering. Many Pet species form suckers at the same time they are forming flower buds...so just as you are about to have a flowering plant, the symmetry of the rosette is all distorted.... but, other qualities of the plant made me overlook the suckers this time. Rosettifolia suckers a lot, so I always expect that in the hybrids...although with hybridizing, suckering does seem to be diminished in the hybrids, compared to what the species does.
Thanks also to Dale Martens, for taking the lovely photos and for sharing them. I was not expecting to get to see the show, as work was causing me to leave soon after my talk. ...but I did get to see the show, as a surprise. So lesson learned.... Don't ever go anywhere near a show without my camera!!!
Posted by Tim at 6:51 AM

Yes, it has been a while since I posted to the blog. My apologies to those of you who have waited so patiently and supportively for more news from the world of Pets. I appreciate so much the emails inquiring about me and the blog. A busy work schedule and travel schedule have kept me away from posting, but NOT away from the Pets. It is good to be back, and I have outlines for many new posts and topics to come.
So here's whats happening with our beloved Petrocosmeas.....
First, I named the basement growing room where I cultivate the majority of the Pets. I get lots of inquiries about my growing conditions. I grow my Pets in a basement room that once functioned as a large coal bin back in the early 1900's when my home was built. Pittsburghers used a lot of coal, I guess, and basements often had a room partitioned off from the rest of the basement for the purpose of storing the coal. Mine is a block room with one tiny window. I've begun calling it the "Pet Cave".... so you'll see me refer to the Pet Cave from time to time. And the Pet Cave has been busy over these last few months that I've been away from the blog. It has even churned out a few show winners this spring! 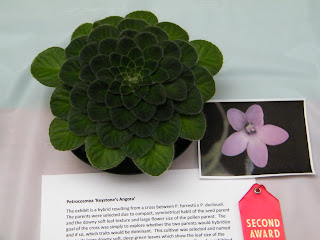 Petrocosmea 'Keystone's Angora' scored 94 points and a second place ribbon at a recent show where I both judged and exhibited a few of my new plants. Since the judging is competitive, compared to AVSA judging which is merit judging, the plant got a second place ribbon in the New Hybrids Class. I'm always happy when one of my new hybrids scores well. I was proud of this one. Judges loved the velvety foliage, and I allowed them to "pet it" after judging. (By the way, I did not judge this section! ) 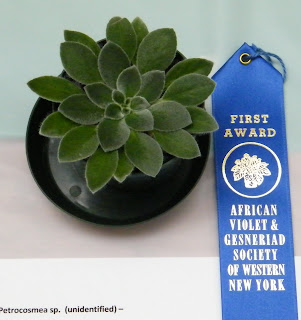 Another of my new Pets, this time a newly cultivated unidentified species from China. It scored 93 points in the New Gesneriads class and got a first place ribbon. I'll post more on this species, plus a couple of others in a future post. This plant was exhibited quite small, but seems to be a compact grower. 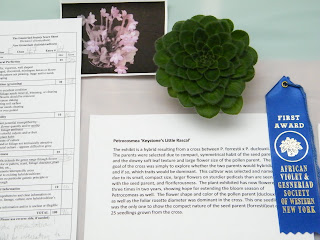 Petrocosmea 'Keystone's Little Rascal' (above) is a sibling to P. 'Keystone's Angora' in the first photo. It was also entered into the New Hybrids class and got the first place award, with a score of 96. This cultivar stays very small, under four inches on the average, with smaller leaves and flowers than it's siblings. The flowers most often have six or more petal lobes and the plant after two flowerings, has been very floriferous. I included a photo of the plant in bloom for the judges to see what the flowers look like, since the show was in the spring, and that is outside the normal bloom season for most of my Pets. After the show, I shared lots of leaves with judges and growers, so I hope to see these in wider cultivation soon.
So, in addition to growing and hybridizing, I've judged a spring show, given three talks on Pets to various AV and gesneriad chapters including a talk last week at the AVSA convention in Cherry Hill, NJ, and have recently co-written an article on Judging Petrocosmea Out of Bloom for Appraisal, the journal for judges for the Gesneriad Society. It's been a busy winter and spring, but I am very excited to be blogging again!
Posted by Tim at 5:40 PM