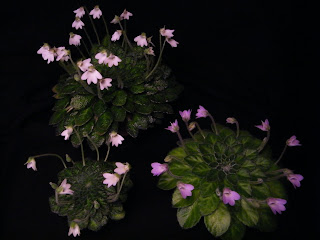 A Family Portraint showing P. rosettifolia #3 in the back, the seedpod parent of my first two hybrids...P. 'Keystone's Bantam, in the front, left and P. 'Rosemary Platz' on the front right.


With Petrocosmea season in full swing here in southwestern Pennsylvania, I'm enjoying an abundance of bloom. Yesterday I counted 58 Petrocosmeas in bloom, with almost as many still forming buds and yet to flower. But, no matter how many Pets I have in bloom, or how many are yet to come into my collection, two will always remain special in my heart...my first two hybrids. Petrocosmea 'Rosemary Platz' and P. 'Keystone's Bantam' are now currently in flower along with one of the parents P. rosettifolia #3. I had to take this occasion to take a photo of the three together for comparison. 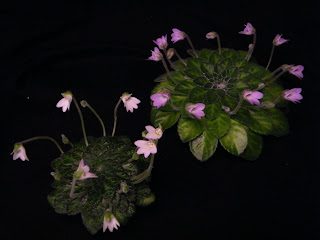 P. 'Keystone's Bantam' with it's white flowers, each larger than it's leaves, and P. 'Rosemary Platz', which seemed to inherit all of the best features of both parents of the cross. I still have such a clear memory of the morning in October, 2007 when I made the cross, by applying pollen from P. sericea to the flowers of my favorite form of P. rosettifolia...the form I labeled #3. Within a couple of weeks, the seedpods were forming, and I remember thinking that they would probably contain no seeds, or if they did have seeds, they would not germinate. But, those three pods DID contain viable seeds and they were planted the following January, 2008. First flowers appeared in October and November of that same year. Through the whole process, I remained in disbelief that I had been able to finally produce seedlings after ten years of failed attempts. 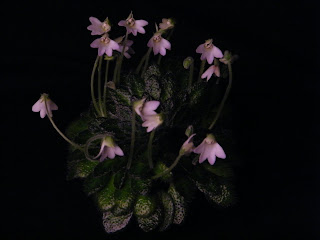 Little 'Keystone's Bantam' was the oddity of the cross. It remained tiny from the very beginning. While it's siblings all grew quickly, it reached about 1.5 cm and stopped getting larger for months. Finally, that tiny green button of foliage did slowly get larger until it was 2 inches in diameter, when buds began to form. That original plant, shown above, remains under three inches today...more than three years later. This is it's third year of bloom. The tiny leaves are deep green, almost black at times, with the lighter yellow central veining of its P. rosettifolia parent. This was also the only white flowered seedling in the batch of more than thirty that I have flowered to date. The only 'tiny' one. I chose the name in honor of my dear friend and fellow Petrocosmea enthusiast, Paul Kroll. In addition to growing spectacular Petrocosmeas, as well as most other gesneriads, Paul grows, shows, and judges Japanese bantam chickens. The fantailed appearance of the flowers on 'Keystone's Bantam' reminded me of Paul's little chickens. Paul grows tiny little chickens, but his Petrocosmeas are gigantic.... I often say the Paul Kroll can grow a 12 inch Petrocosmea in a bottle cap! He phoned me this evening to tell me that his own plant of 'Keystone's Bantam' is now in bud also!! 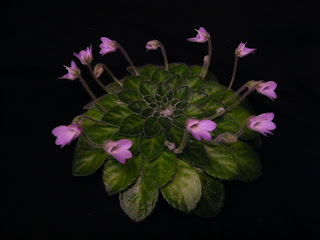 The star of my first hybrid cross is indeed P. 'Rosemary Platz'...my very first named hybrid Petrocosmea. I named this hybrid in honor of another cherished friend - Rosemary Platz from Long Island, NY. Everytime I see this plant flower, I am reminded of how lovely my friend is. The flowers on this hybrid have a pleasant yellow throat with white and silver lavendar lobes on the corola. Flowers most resemble the P. sericea parent. Leaves are glossy, intermediate in shape and size between both parents, and with good culture, often show a subtle lighter veining. I have been very proud to see this hybrid showing up an winning some blue ribbons in shows when exhibited by other growers.

One of the interesting points I'm learning from the study of a single genus, day to day, for several years now is that Petrocosmea plants clearly evolve and change over time. One theory I'm starting to consider is that Petrocosmea may indeed progress through different "phases" or stages in development over time, as the plants mature. I've seen this with most of the species now. As young plants the leaves, flowers, pedicels or cymes, ...almost every characteristic of the plants, seem to change over time. Recently, I've been studying this, and have found a number of articles that discuss the molecular changes that the leaves of various plants go through as they mature.... I've begun to wonder whether this is truly what I am seeing with Petrocosmea, or if they are simply "growing up" and it takes more than a couple of years for them to mature.
I guess that is a topic for another post at another time...but the second annual flowering of a relatively new species to my Petrocosmea collection just makes me ponder my theory even more.

You may recall a post from October of last year, where I first introduced you to this species. While flowering is a bit later this year, the plant is putting on a spectacular, and more impressive show than it did last year. I also mentioned last year that I had begun sharing leaves of this species with a few friends. It has been fun, and rewarding, to get email and calls from those friends over the last few weeks, as the plants they propagated from those leaves are also flowering for them. 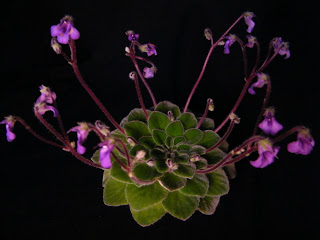 The photo above shows the same plant as the one in the photo below....it's just a year older now... Do you see a difference? Dramatic isn't it? The rosette really isn't much bigger with regard to diameter...but it does have more leaves. The plant remains in the same pot as it was a year ago when it first flowered. The plant now has a diameter of exactly four inches. Flowers are larger, and are dancing on the ends of purple pedicels. For such a small plant, it is making a dramatic show, and I am thrilled to have it in my collection. I've maintained three plants, and all three are nearly identical.

Just to refresh, my label reads : P. cavaleriei 'ABG 2005-2221' TT04. This label tells me that the plant came from the Atlanta Botanic Gardens, was collected in it's natural habitat in 2005. The 2221 is the ABG's accession number, and the TT04 is my own accession number, which ties to the records I keep of all of my Petrocosmea species. I make sure to pass these numbers along to anyone who I share leaves with. The species was collected in southwestern China. 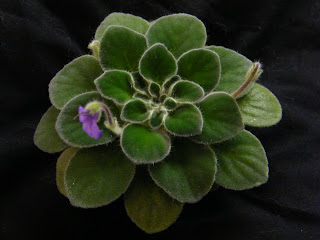 The same plant flowering in the first photo, as it looked a year ago upon it's first bloom. Don't measure your Petrocosmeas by how they perform the first year or two after you get them...they must mature to show true potential. I am still amazed at some of my plants as they grow into the sixth, seventh, even the tenth year in my collection.. They impress me more each year. 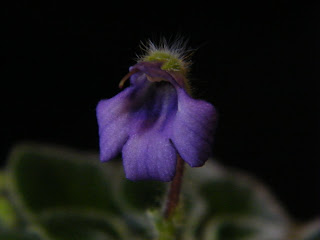 An individual flower of P. cavaleriei shows that it fits easily into Petrocosmea Section Anisochilus. DNA studies show that it is very closely related to P. sericea and P. sp. 'HT-2'. I also detect a faint fragrance from the flowers of my plant, although not as much as I can smell from sericea or 'HT-2'. While sericea does not produce branched cymes for me, cavaleriei and sp. 'HT-2' do produce branched cymes with maturity. Like it's close relatives, this species likes to be grown a bit drier with regard to watering and drainage of the soil. It also seems to look best with a bit more light. Leaves, if kept too humid and splashed with water, will form the bleached spots often seen on African violets. P. sericea and sp. 'HT-2' also show leaf spotting, while I don't see this phenomenon on other Petrocosmea species.
An additional note regarding propagation... this species, as do other Pets with heavily felted leaves, will rot easily if the rooting medium is kept too wet during rooting. I avoid this by not burying the petioles, but simply laying them gently on top of the rooting medium such that the tip of the petioles just barely touch the medium. I've often had these species form plantlets when the leaves broke off and fell onto the acrylic matting I line my trays with.
I hope that with time, this species will get wider distribution among Petrocosmea enthusiasts, and that we will see it more often in plant shows. Since it does not have particularly ornamental foliage, however, it would likely do best in a show as a flowering specimen. Still, it is a fascinating new species to have in one's collection.